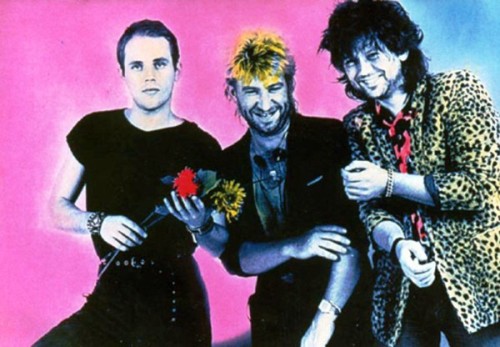 Extrabreit was founded around the end of 1978, when they began their career as a German punk rock band; later they were ascribed to the Neue Deutsche Welle (NDW) movement, though their music is not typical of the NDW genre. It was influenced heavily by punk rock music, and their lyrics were often critical of politics and society. The members viewed themselves as punks, whose only association with the NDW was that they appeared at the same time. As testament to that, they wrote on their homepage: "Ja wir haben den Scheiß eben mitgemacht!" (Yeah, we went along with that shit).

The highlight of their career was seen from 1981 until 1983, as they played for sold-out crowds, had records go Gold and Platinum and were pictured on the cover of BRAVO. After two band members left the group in 1983, they released two albums: 'Europa' and 'LP der Woche'. After a creative break until 1987, the band returned with an album that was heavily influenced by The Cure. In the 1990s, Extrabreit moved onto writing lyrics highly critical of society and full of sharp sarcasm (a little bit similar to Dead Kennedys). Their new work did not enjoy the same commercial success of their earlier albums. After their 'Final concert' in the "Berlet Halle" Hagen - Hohenlimburg on 19 September 1998, the group went on to play in Bochum in 2002 and are touring Germany. Also they had in 2010 a concert with the Philharmonic Orchestra Hagen. In the past they recorded songs with Hildegard Knef, Harald Juhnke and Marianne Rosenberg.

Extrabreit played their 1000th concert on 27 August 2005 to several thousand fans in Hengsteysee in Hagen. The band was presented with their first Platinum record for their first major success in 1980. [SOURCE: WIKIPEDIA] 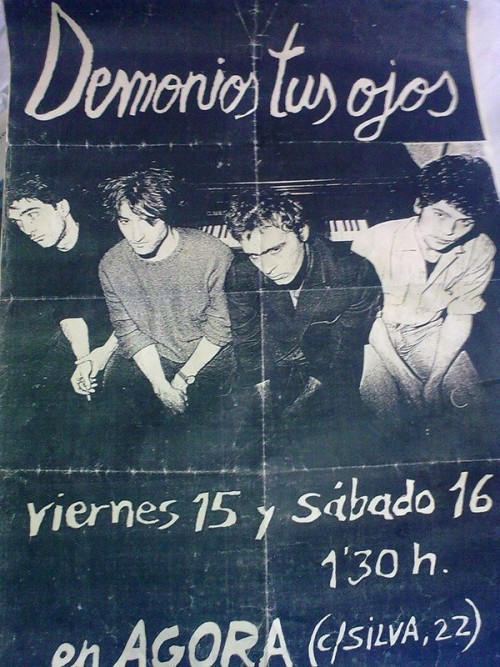 In 1987, after the dissolution of Mar Otra Vez and having one of his periodic and violent emotional crises, Javier Corcobado contacted Javier Colis and together they composed a repertoire of songs as Demonios Tus Ojos. The band was completed with Nacho Colis on drums, who played alongside his brother Javier on another project (Vamos A Morir), and bassist Javier Almendral.

Demonios Tus Ojos had a short but intense life that left an album of the same name released by Gasa in 1988, which captured the complex personality of the group combining echoes of urban rock, blues, free and noise. The tear in Corcobado's voice and texts, the precision madness of the tandem composed by the Colis brothers and the thrust and distortion of Javier Almendral meant one of the biggest, intense and emotive short circuits of modern popular music in Spain. The album was re-released in 1996. 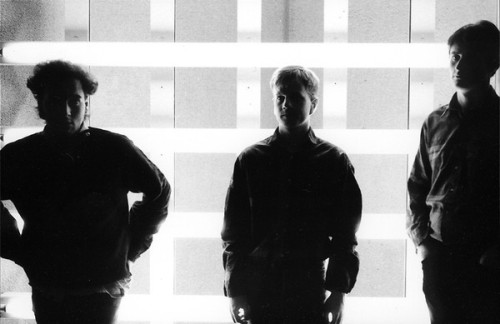 Nebraska's lone dream pop entry, For Against initially consisted of bassist and vocalist Jeffrey Runnings, guitarist Harry Dingman, and drummer Greg Hill. Dingman and Hill left after 1988's 'December' to form The Millions, and they were eventually replaced by Steven "Mave" Hinrichs and Paul Engelhard after another lineup failed to work out. (Dingman returned in the 2000s.) Since its inception, Runnings' band consistently produced a drifting yet distinctly rhythmic sound, soldiering through the myriad trends of the '80, '90s, and 2000s. With one foot in the British post-punk of Joy Division and the other in the gliding atmospherics of Kitchens of Distinction, For Against were treasured by shamefully few, due to geography, infrequent touring, and releases on small labels that relied more on word of mouth than on advertising. During the 2000s, the band's early releases for Bruce Licher's Independent Project label, through 1990's 'In the Marshes', were reissued on CD by Words on Music. In 2013, Captured Tracks reissued them once more, this time in a limited-edition vinyl box set. [SOURCE: ALLMUSIC] 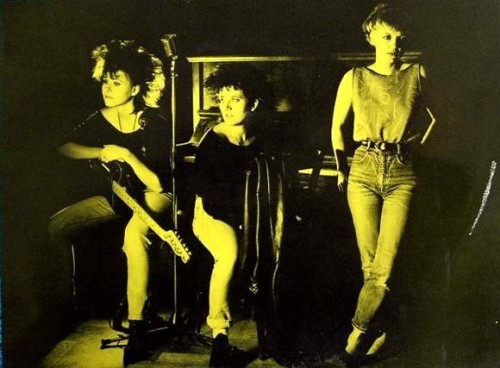 Chin Chin, an all-female group consisting of Karin (guitar / vocals), Esther (bass / vocals) and Marie-Anne (drums / vocals), was formed in 1982 in Biel, Switzerland. At the time experience wasn't needed, a desire to play was. Technical ability was a bonus, a hunger to perform a must. So, although Esther and Marie-Anne had experience as singers for local band Sophisticated Boom Boom, neither had actually played bass or drums respectively before. Similarly, while Karin had some training in classical acoustic guitar, she'd never been in a band or played electric guitar before.

It was veteran Swiss punk-rock band SOZZ that gave the eager girls their first break, letting them practice in their rehearsal room and lending them guitars and drum kit until they could afford their own. Musically the band had many influences: The Clash, The Ramones, X-Ray Spex, Blondie, Generation X, Siouxsie & The Banshees, David Bowie, Motown, 1960s girl groups and glam rock bands like T-Rex and Slade. Early rehearsals saw the girls cover classics such as The Ronettes' "Baby I Love You" and The Crystals' "De Do Ron Ron Ron" due to their relative simplicity, but original material soon followed and, in November 1983, Chin Chin played their first gig at the AJZ/Coupole in Biel.

Although the band started life as a trio, it was always the aim to recruit a lead singer and a second guitarist, but the search was to prove very difficult. Although there was a vibrant alternative scene in Switzerland, female musicians were virtually non-existent. There were plenty of girls wanting to sing, but few who actually could. The band would hold more auditions than the singers could notes. And although Chin Chin saw themselves as a punk-rock band, catchy pop vocals and harmonies played a big part in their songs, setting them apart from the other contenders in the process.

Eventually, Carol joined the band as lead singer and Chin Chin's first and only 7" 'We Don't Wanna Be Prisoners' (containing 3 self-penned songs) was released in the summer of 1984 on the band's label Farmer Records, co-owned with SOZZ, making Chin Chin one of the only all-female bands in Switzerland writing their own material, playing regular gigs and releasing records. However, soon after recording, Carol left Chin Chin, and Karin, Esther and Marie-Anne decided to continue as a three-piece with Karin and Esther sharing lead vocals at live gigs.

In 1985, Chin Chin's album 'Sound Of The Westway' was released on Farmer Records, containing 12 original compositions recorded and mixed in just 7 days. 'Sound Of The Westway' is a brilliant mix of punk-informed crunch and buoyant pop melody that shows Chin Chin to be true pioneers of DIY noisy pop. As it happens this combination of DIY punk ethic, fuzz guitars and bubblegum pop was also gaining traction in the UK with the nascent C86 scene. Featuring bands like Shop Assistants and The Pastels, C86 was a confluence of young bands who were as influenced by Phil Spector as The Ramones, and Chin Chin fit right in next to groups like The Rosehips and The Fizzbombs.

'Sound Of The Westway' caught the attention of NME journalist The Legend!, who published the first UK interview with the band. On the heels of this great press, Chin Chin were approached by the management of Scottish band The Shop Assistants with an offer to support them on their German tour. The tour was hugely successful, leading to the release of the 'Stop Your Crying' EP on Scotland's legendary 53rd and 3rd label and a busy period of appearances on TV, radio and more gigs in Switzerland, France and Germany. Apart from headlining their own gigs, Chin Chin also supported bands like The Pogues, The Anti-Nowhere League, TV Personalities, New Model Army and Die Toten Hosen.

'Sound Of The Westway' has gone on to become one of the most sought-after 80s indie-pop records and for good reason. Tunes like "Dark Days" and "Stay With Me" still sound remarkably fresh today; the band's fierce DIY stance and girl-positive ethics have echoed down through indie music since. [SOURCE: DISCOGS] 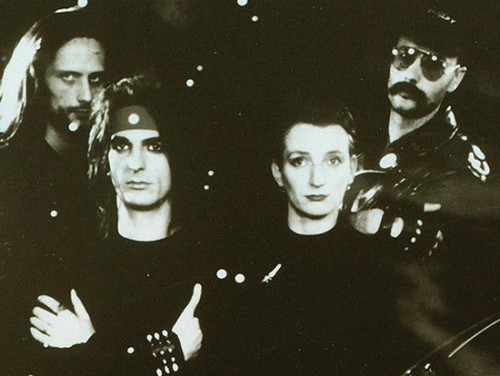 Borghesia is a Slovenian electronic music/rock music group, created in Ljubljana in 1982. The band was formed by members of the alternative theatre group Theatre FV-112/15. Borghesia created its aesthetics using the imagery of what was prohibited, tabooed, and repressed. Their sound is often compared to that of other groups in the period such as D.A.F., Manufacture, and Front 242, whom many cite as the chief instigators of the Electronic Body Music label used to describe such music.

Borghesia went on several Europe-wide concert tours, mainly in 1988–91, which were reviewed in large music magazines in England, Germany, etc., such as NME, Melody Maker, New Life Soundmagazine, and Zillo. They released four albums on Play It Again Sam, one of the more important indie labels, which were also licensed to Wax Trax in the US and Canada. Further interviews and articles can be found in the aforementioned magazines. Aldo Ivancic later formed the band Bast, and is famous in the Slovenian music scene today as a producer. Borghesia together with Laibach were prominent representatives of Slovenian alternative pop music, and topped the bill on the compilation albums 'Trans Slovenia Express', released on Mute Records. [SOURCE: WIKIPEDIA] 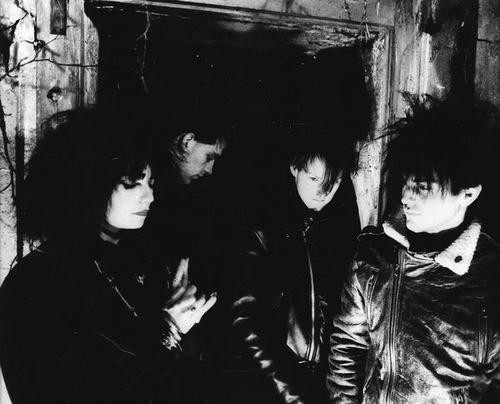 Asmodi Bizarr was a German postpunk / deathrock band from the early 80's formed in Düsseldorf by Monique and Andy. The band was also part of the so-called German Dark wave of the 80's decade being one of the most important and pioneers in its musical field. Throughout his 12 years of career Asmodi Bizarr participated in many concerts and festivals with renowned bands such as Fields of the Nephilim, Sex Gang Children, The Cult, Danse Society and Christian Death among others. In November 1992 the band announced that they would give the last concert. After the separation of the band Monique and Matej formed Orange. Monique soon leaves the band and would form B-Bang Cider. In 2001 the band met for a single reunion concert in their hometown Düsseldorf. [SOURCE: LAST.FM] Greg Hynes and Bob Peterson began playing together in 1978 in a project called Détente. The band later became the Teds, which started out as a four piece. They practiced at their second guitarist, Slim Corless’ house. But Slim had a meltdown one day and kicked the guys out. So Mark Bycroft, who had hung out and listened to them practice, approached Bob and told him that he could play guitar.
Drawing influenced from the Stones, Beatles, Talking Heads, Devo, Clash and Sex Pistols, they were looking for a modern take on the early British invasion of the 60’s, as well as the rockabilly sound of the 50’s. They started gigging regularly, playing halls, vacant churches, VFW’s, condemned buildings and bars such as Friar Tucks, Mason Jar, Star System and Mad Garden. They built a small but loyal following while sharing the stage with fellow Phoenix-area bands like Blue Shoes, The Feederz, Meat Puppets, JFA, and Sun City Girls. They also opened up shows for touring acts like The Blasters, The Waitresses, and The Alley Cats.

By the summer of 1980, they were ready to go in the studio to record. So they flew out to LA to lay down tracks with their manager Tony’s brother, Eddy Beram, who was a drummer that toured with The Everly Brothers. Eddy recorded and mixed eight songs in one day, then the guys picked out four of them to be released on their EP.

At the time, there were no labels in Phoenix putting out records. So Greg, Mark and Tony formed Placebo Records in order to put out the Teds EP. 500 copies of 'The Eighties Are Over' were pressed with the first 50 being hand numbered and signed by all members. Having no connection to national distributors and receiving little press besides local reviews, most of the copies were sold locally.

By 1983, Greg had started Mighty Sphincter. He intended on keeping both bands going but Bob wasn’t agreeable to it, so the Teds broke up. Meanwhile, Placebo Records was blossoming because there was such a vibrant music scene in Phoenix. Besides a series of compilation LPs that showcased local talent, individual records were released by JFA, Sun City Girls, Conflict (US), and of course, Mighty Sphincter, amongst many others. The label stayed active through the late 80s. [SOURCE: CHEAP REWARDS]