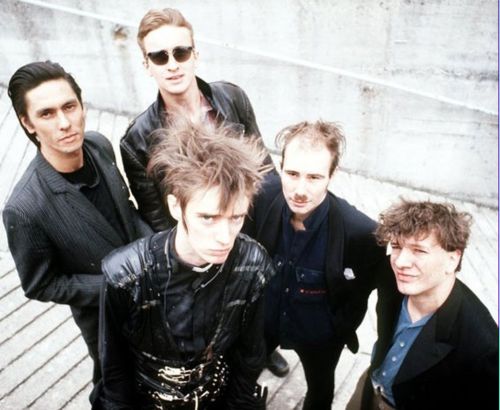 Along with Cabaret Voltaire and Throbbing Gristle, Germany's Einstürzende Neubauten ("collapsing new buildings") helped pioneer industrial music with an avant-garde mix of white-noise guitar drones, vocals verging on the unlistenable at times, and a clanging, rhythmic din produced by a percussion section consisting of construction materials, power tools, and various metal objects. Einstürzende Neubauten were founded by vocalist / guitarist Blixa Bargeld and percussionist / American expatriate N.U. Unruh in Berlin as a performance art collective; their early activities included a seemingly inexplicable half-naked appearance on the Berlin Autobahn, where the duo spent some time beating on the sides of a hole in an overpass. The group's early lineup also included percussionists Beate Bartel and Gudrun Gut, plus contributor and sound engineer Alexander Van Borsig.

Einstürzende Neubauten's earliest recordings are mostly unstructured, free-form noise issued on various cassettes and singles, including their first single "Fuer den Untergang," the 1981 EP 'Schwarz', and the 1982 album 'Kollaps'. Some of these recordings are compiled on the 'Strategies Against Architecture '80-'83' collection, with live shows on the cassette-only '2x4'. Bartel and Gut were replaced by ex-Abwärts member F.M. Einheit (who served as Neubauten's chief machinery operator) in 1983, when guitarist and electronics expert Alexander Hacke and Abwärts bassist Mark Chung also joined. A tour of England opening for The Birthday Party resulted in a contract with Some Bizarre Records, which released the slightly more structured 'Zeichnungen des Patienten O.T.', as well as consternation from club owners and journalists over Neubauten's stage demolitions and frequent ensuing violence.

When Nick Cave left The Birthday Party and formed his backing band The Bad Seeds, Bargeld became the guitarist and toured and recorded with Cave over most of the decade. He remained with Neubauten, however, who released 'Halber Mensch' in 1986, showcasing their wider range of expression. The group disbanded briefly but soon re-formed, releasing albums off and on for Elektra and signing to Trent Reznor's Nothing label for 1998's 'Ende Neu'. While Bargeld remained a Bad Seed, Van Borsig and Hacke contributed to the remainder of The Birthday Party's recordings as Crime & the City Solution. In May 2000, Einstürzende Neubauten released the full-length 'Silence Is Sexy' on Mute Records. Two years later, they announced they were no longer interested in working with a traditional label and that their next recording would be made with the help of supporters. These supporters would pay a fee, receive exclusive material, and help fund the next official album.

Despite their best intentions, Einstürzende Neubauten released their 2004 album, 'Perpetuum Mobile', on Mute. The releases for supporters that appeared over the next few years helped fund the official album 'Alles Wieder Offen', which was released on the band's own label in 2007. Elektra reissued both 'Strategies Against Architecture' compilations on CD, and another supporter album, 'Einstürzende Neubauten', arrived in mid-2007. 'The Jewels' arrived in 2008. It was compiled from a series of single-track digital downloads the band offered via its website one at a time using a game called DAVE, where deliberate and enigmatic instructions were inscribed on cards the members drew and generated ideas from -without telling one another what their cards were inscribed with. They were then used to construct and complete tracks within a day or two. In 2010, Mute released the compilation 'Strategies Against Architecture, Vol. 4', and the album 'Kollaps' was remastered and reissued by Potomak. Their 2014 effort, 'Lament', was based on music composed for a World War I memorial exhibition held in Diksmuide, Belgium.[SOURCE: ALLMUSIC]