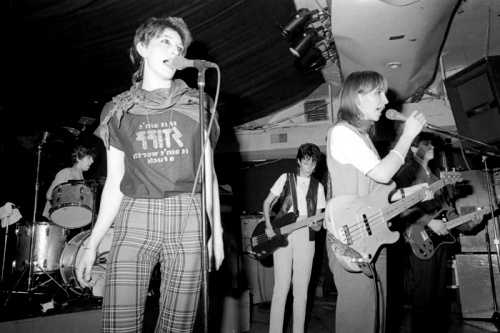 Initially inspired by the success of local heroes The Mekons and Gang of Four, Leeds, England's Delta 5 later emerged as one of the key figures of the feminist new wave. Formed in 1979 by vocalist/guitarist Julz Sale, fretless bassist Ros Allen, and bassist Bethan Peters, the group was begun on a lark, but following the additions of guitarist Alan Briggs and drummer Kelvin Knight, Delta 5 issued their debut single, "Mind Your Own Business", and found themselves thrust to the forefront of the Leeds post-punk community.

Frequently linked to Gang of Four -in addition to a similarly abrasive funk sound, Delta 5 was also at the vanguard of the Rock Against Racism movement, and Knight even once sat in for Gang drummer Hugo Burnham- the group's role as political leaders increased in the wake of a notorious street attack on its members by right-wing thugs, culminating in the rise of the Rock Against Communism groundswell. Their unique two-bass rhythm section set them clearly apart from their peers, and with the success of their second single, "You", they mounted a successful U.S. tour.

Upon leaving Rough Trade to sign with the Charisma subsidiary Pre, in 1981 Delta 5 issued their debut LP, 'See the Whirl'. Despite the inclusion of some of their early single sides, much of the record fell prey to over-production, and was a critical and commercial failure. The group split shortly after its release. Much of the group's output remained hard to come by until the 'Singles & Sessions' compilation was released by Kill Rock Stars in 2006. [SOURCE: ALLMUSIC]