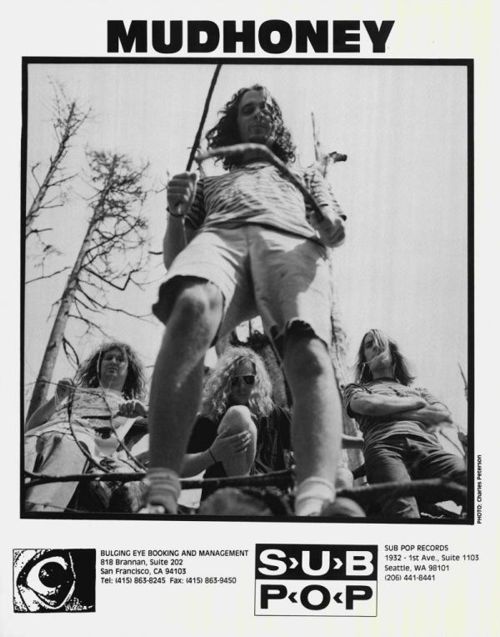 Nirvana may have been the band that put an entire generation in flannel, and Pearl Jam and Soundgarden both sold a lot more records, but Mudhoney were truly the band that made the '90s grunge rock movement possible. Mudhoney were the first real success story for Sub Pop Records; their indie-scene success laid the groundwork for the movement that would (briefly) make Seattle, Washington, the new capital of the rock & roll universe; and they took the sweat-soaked and beer-fueled mixture of heavy metal muscle, punk attitude, and garage rock primitivism that would become known as "grunge" to the hipster audience for the first time, who would in turn sell it to a mass audience ready for something new. Though Mudhoney never scored the big payday some of their old-running buddies did, their importance on the Seattle scene cannot be underestimated, and their body of work -big, loud, purposefully sloppy, a little bit menacing, and even more funny- has stood the test of time better than their well-known colleagues.

Mudhoney's time line begins in 1980, when teenaged Mark McLaughlin (who would soon adopt the punk handle Mark Arm) formed the band Mr. Epp and the Calculations with some high school friends from the Seattle suburb of Bellevue; none of whom actually knew how to play at the time. More interested in goofing off, breaking things, and posting flyers for shows that were never scheduled than actually making music, Mr. Epp didn't get around to playing a show until late 1981, opening for a band called Student Nurse. Despite their legendary ineptitude (they were described as "the worst band in the world" on more than one occasion), Mr. Epp began to develop a following, and released a 7" EP in 1982. In 1983, in a bid to sound more like a real band, the group added a second guitarist, Steve Turner, who had previously played in a garage band called The Ducky Boys. That same year they released their 'Live as All Get Out' cassette, but things began to peter out for the group, and they played their final show in February 1984. In 1981, Arm and Turner, who'd become fast friends, also began playing in another joke-punk band, The Limp Richerds, and briefly placed their focus on that group until the Richerds also broke up near the end of 1984.

Eager to start playing again, Arm and Turner teamed up with drummer Alex Vincent, who had played with Turner in a short-lived band called Spluii Numa, and bassist Jeff Ament, who had recently arrived in the Northwest from Montana. When Arm decided he wanted to put down his guitar and concentrate on vocals, Turner asked former-Ducky Boys guitarist Stone Gossard to join the group, and Green River was born. Along with fellow Washingtonians The Melvins, Green River were pioneers of a new Northwest rock sound, merging the snot-nosed sneer of punk with the minor-key thud of heavy metal. It didn't take long for Green River to get noticed on the Seattle rock scene, and in 1985 the band released its first EP, 'Come on Down'. By the time the record hit the streets, Turner had left the band to return to college (he was also growing disenchanted with the harder rock direction the band was following), and with new guitarist Bruce Fairweather, the band set out on a nationwide tour that was little short of disastrous, in large part because a delay in the record's release had the band supporting an album that hadn't come out yet. The band survived to make a second EP, 'Dry as a Bone', for a new Seattle label, Sub Pop Records, in 1987 -but by the time its first full-length album, 'Rehab Doll', was released in the summer of 1988, tensions between members of the band caused Green River to split up. Ament and Gossard formed a new band called Mother Love Bone; Fairweather joined Love Battery, and Vincent went to law school.

Arm and Turner, meanwhile, had formed a side project while in Green River called The Thrown Ups, featuring graphic artist Ed Fotheringham on vocals. Essentially a more extreme example of the sort of goofy onslaught Arm and Turner had let loose with Mr. Epp, The Thrown Ups brought the two friends back together again, but Turner expressed a desire to form a new band that actually rehearsed songs before playing them in front of an audience. In his spare time, Turner began working up new material with Arm and drummer Dan Peters, who had played in Bundle of Hiss and Feast. Needing a bassist, the three hooked up with Matt Lukin, who had recently left The Melvins shortly before they left Washington for California. Naming themselves Mudhoney after a Russ Meyer film none of them had actually seen, the new foursome took the punk metal formula of Green River and The Melvins, added a dollop of '60s garage rock swagger and a large portion of "Fun House"-era Stooges, and ran it all through the cheap stomp boxes Arm and Turner so cherished. Turner initially expected the band to last about six months.

In 1988, Sub Pop released the band's first single, "Sweet Young Thing Ain't Sweet No More" b/w "Touch Me I'm Sick," with the EP 'Superfuzz Bigmuff' following a few months later. The timing proved fortuitous. The indie circuit success of The Replacements and Big Black had created a demand at college radio and the underground club circuit for harder and heavier bands, and Sub Pop's homegrown but earnest media blitz was helping to make "the Seattle Sound" -soon to be dubbed "grunge"- the next big thing, with Mudhoney the chief beneficiary. While the band's first American tour was nothing to write home about, the Sub Pop hype machine had already begun to take hold overseas, and the band scored a European tour -mostly dates in Germany- in early 1989. A few months later, Sonic Youth, who'd been big fans of Green River, invited Turner and Arm's new band to join them for a British tour, and soon Mudhoney found themselves the talk of the U.K. rock press. 'Superfuzz Bigmuff' landed on the British indie charts and stayed there for the better part of a year, and the band wasted no time returning for a headlining tour, complete with massive press coverage and riotous shows. Word of the band's rep in Europe quickly crossed the pond, and Mudhoney were the new heroes of underground rock by the time their first full-length album, simply called 'Mudhoney', came out in late 1989.

In the wake of Mudhoney's success, a number of other Sub Pop acts began making big noise on college radio and the indie club circuit, including Soundgarden, Tad, The Fluid, and a trio of Melvins fans from Aberdeen, WA, called Nirvana. However, while Sub Pop was doing a fine job of creating the Next Big Thing, they weren't making much money at it just yet, and the label's financial status was one reason Mudhoney's second full-length album, 'Every Good Boy Deserves Fudge' -which found them upping the garage punk quotient in their formula- didn't hit stores until 1991. By the end of the year, Mudhoney were shopping for a new label, and they could have hardly chosen a better time; Nirvana had already taken the major-label bait in 1990, and by December of 1991, "Nevermind" had made them the biggest and most talked-about rock band in America. Soon, seemingly every band in Seattle was being offered a major-label contract, and Mudhoney signed a deal with Reprise/Warner Bros. Their first major-label album, 'Piece of Cake', made it clear that Mudhoney's new corporate sponsorship wasn't going to change their musical approach -but their presence on a major label seemed to alienate old fans, while the mass audience that had embraced Nirvana, Soundgarden, and Pearl Jam (featuring Arm and Turner's old Green River bandmates Stone Gossard and Jeff Ament) found Mudhoney's work too eccentric for comfort. While Mudhoney remained a potent live draw, their record sales during their tenure with Reprise were disappointing, though they recorded two of their finest albums for the label: 'My Brother the Cow' and 'Tomorrow Hit Today'.

In 1999, after an extensive tour supporting 'Tomorrow Hit Today', Reprise announced that they had dropped Mudhoney from their roster, and shortly after that, the band announced that Matt Lukin had turned in his resignation, citing his dislike of touring. With the release of 'March to Fuzz', a comprehensive career-retrospective compilation, many observers assumed that Mudhoney had called it a day, but in 2001 the band began playing a few live dates around the Northwest, with Steve Dukich (formerly with Steel Wool) sitting in on bass. The shows went well enough that Mudhoney decided to take another stab at their career, and Guy Maddison -who'd been a member of Bloodloss, one of Arm's many part-time bands- signed on as Mudhoney's new official bassist. Arm and Turner also found time to record and tour with a side project, the garage-blues band Monkeywrench. When they came back together, they recorded 'Since We've Become Translucent' and released it in the summer of 2002. The angry political and social commentary 'Under a Billion Suns' appeared in 2006, followed by the deliberately raw return to their aggressive roots 'The Lucky Ones' in 2008.

In the years following 'The Lucky Ones', Mudhoney toured regularly, with one of the highlights being a showcase of the entire 'Superfuzz Bigmuff' album at the 2010 All Tomorrows Parties in New York. All this was preparation for a 25th Anniversary blow-out in 2013, when the band released their ninth studio album, 'Vanishing Point', and a home video release of the documentary "I'm Now", which was screened at various film festivals in 2012. [SOURCE: ALLMUSIC]