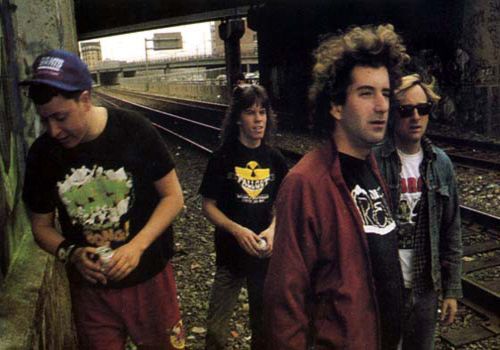 Far and away the biggest name to emerge from the Boston hardcore scene, Gang Green was an unabashed party band specializing in beer-soaked, warp-speed three-chord thrash. Obsessed with beer, skateboarding, sex, and more beer, the group slowly added stronger hints of heavy metal as their career wore on, but otherwise followed much the same blueprint both musically and lyrically. Predictable though they may have been, their simple party-hearty philosophy, coupled with their irreverent streak of humor, was not only cultishly adored but influential as well, exerting an undeniable pull on the frat-friendly Orange County punk scene. Lead singer/guitarist Chris Doherty was the lone constant in the lineup, and managed to keep "the King of Bands" (as they were dubbed, from the Budweiser slogan) going off and on for more than two decades.

Chris Doherty formed the first incarnation of Gang Green in 1982, along with bassist Bill Manley and drummer Mike Dean. This lineup cut seven tracks (none longer than a minute-and-a-half) for the scene-documenting compilation "This Is Boston Not L.A." (on Modern Method), but soon disbanded. One more Gang Green track appeared posthumously on Modern Method's 1983 EP "Unsafe at Any Speed", and the remainder of their studio recordings appeared on a three-song EP for Taang, 'Sold Out', in 1984. (All of this material was later reissued on the CD 'Preschool' in 1997.) In the meantime, Doherty joined another local punk band, Jerry's Kids, and later moved on to Stranglehold and the ska band The Cheapskates (a forerunner of The Mighty Mighty Bosstones).

Doherty struck out on his own to re-form Gang Green in 1985, along with Jerry's Kids drummer Brian Betzger and the Stilphen brothers, Chuck (guitar) and Glen (bass). This lineup debuted with the 7" single "Skate to Hell"/"Alcohol," the latter of which became a staple of the band's live act (both the song and the substance). The EP 'Drunk and Disorderly, Boston MA' followed in 1986, as did the band's first-ever full-length album, 'Another Wasted Night' (on Taang). Featuring a jokey, attention-grabbing cover of Til Tuesday's "Voices Carry," 'Another Wasted Night' attracted a cult following that grew steadily over the next few years.

The Stilphen brothers subsequently left to form a metal band called Mallet-Head. After a brief interlude with guitarist Tony Nichols (also of the metal band Meliah Rage), the Stilphens were replaced more permanently by guitarist Fritz Erickson and bassist Joe Gittleman for Gang Green's 1987 Roadrunner debut, 'You Got It' (which was immediately preceded by another EP, 'P.M.R.C. Sucks'). Bucking the dominant Gang Green trend, both Erickson and Gittleman stuck around for awhile, completing the 1988 EP 'I81B4U' (a parody of Van Halen's "OU812") and a second album, 1989's 'Older...Budweiser'. Gittleman then made his exit, later joining The Mighty Mighty Bosstones, and was replaced by former D.R.I. bassist Josh Pappe for the 1990 concert set 'Can't Live Without It'.

Roadrunner subsequently dropped the band, spelling the end of their second and most successful incarnation. Doherty and Betzger formed a Green Day-styled punk-pop outfit called Klover, which released one album on Mercury in 1995 before imploding under label difficulties. Doherty then reconvened Gang Green for a third go-round, this time with drummer Walter Gustafson (ex-Outlets), guitarist Bob Cenci (ex-Jerry's Kids), and bassist Matt Sandonato (also of The Chubs). This lineup recorded an entirely new album, 'Another Case of Brewtality', for Taang in 1997, covering much the same subject matter that Gang Green always had. An EP, 'Back and Gacked', followed in 1998. While the group has been silent on record, they continued to perform live, chiefly around the bars of Boston, on into the new millennium. [SOURCE: ALLMUSIC]